Just before Christmas, there was an article discussing how house prices had slumped and there was an increasing number of home owners who were selling their property for lower prices than they’d bought them for.  In a market where the median house price is declining, there is an increased likelihood of this happening, however the majority of sellers would have been making a profit and, as the same article noted, some are making quite substantial profits.

At PropertyESP, we like to delve into the detail to gain real insights.

When we look at that volume of data, one of the most interesting pieces of analysis is to look at resales – when a property has been sold multiple times in the time period.  This gives us the true value of price trends in an area.

Before we do that, we need to weed out the dodgy data or analyse them separately.  There’s always a number of sales where the increase or decrease in sale price is influenced by other factors (e.g. renovation, divorce, subdivision) so that the sale is not a reflection of the true market value.  When analysing resales, it’s important that the property is essentially the same each time it is sold (PS no other company weeds out this data before doing the analysis).

Having flagged those properties and removed them from the data, our analysis identified a number of interesting trends in resales. 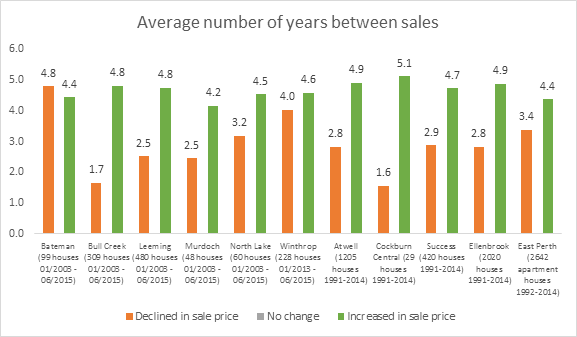 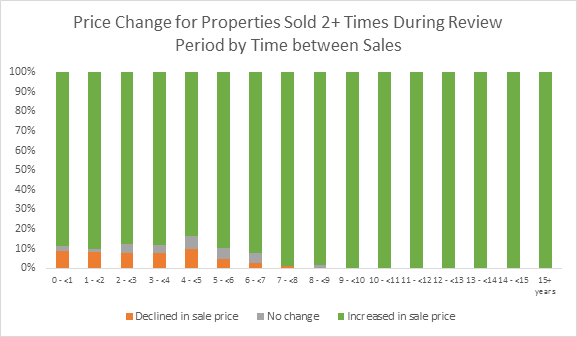 And this 8 year point held true in all of the markets we examined and, in some markets, was actually lower – 7 and 6 years.

This makes sense in the context of the generally increasing long term residential property prices across each of the markets reviewed, but with the occasional decline from one year to the next. 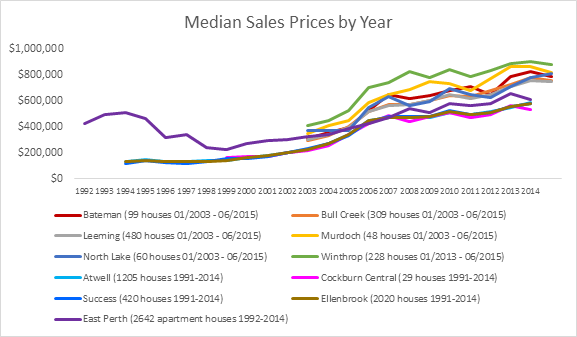 However, this 8+ year sweet spot will only hold true in the context of the trends observed in the Perth residential property market.  If those trends change, for example long term instability or decline in prices, the vendors would need to hold on longer between sales, to achieve growth in sales prices.

And there are other more localised factors that can also affect the time required to achieve growth in sales prices.  Small area speculation (such as the impact of the mining boom and decline on Pilbara property prices); a change in buyer preferences for house type (such as a change in preference from Federation houses to modern houses which reduces the premium price certain styles of property will attract in a local area) and the introduction or removal of key employment generating infrastructure (such as we recently blogged about on the impact of Fiona Stanley Hospital) will all impact on the time it takes for a property to grow in value.

But the good news is that the market is not as dire as you may first assume!

And as always – you can’t speak broadly about the Perth market as some analysts do, because it is quite clear that once you get into the nitty gritty there are some good news story to be told!

PropertyESP we make sense of property!