You may have seen the recent article in the West Australian outlining the research undertaken by 3 Oceans on the Scarborough foreshore with 890 respondents.

This research sought to determine the level of support or opposition to their proposed 43 and 35 storey developments on the corner of Scarborough Beach Rd and West Coast Hwy.

Not surprisingly, overall 63% of the respondents supported the proposal and this was mirrored regardless of whether it was a Scarborough based resident, City of Stirling or Perth based resident.

The number one reason for wanting the proposal to proceed?  Respondents felt the area needed a revamp (56%), it would bring in more tourists (44%), it would create more jobs (32%) and it would be good for local business (31%).

The Scarborough area has languished somewhat for close to 20 years and this has been directly attributed to previous governments’ reticence to support density.  But after spending $100 million on the Scarborough foreshore, this area is now ripe for ongoing investment and it is critical that the current Government embraces the proposed changes to allow the revamp of Scarborough to truly come into play.

Just like Hillary’s Boat Harbour, Graham Farmer tunnel and Elizabeth Quay, there has been resistance from a small vocal proportion of the community.  And yet once delivered, the benefits have been both recognised and celebrated – and at PropertyESP we can’t help feel that this will be the case for Scarborough as well.

The fact is, as a developer, if you want to hear the honest views of the mass majority then you have to be the one to action it.  3 Oceans took the bold step of hitting the ground to hear people’s opinions and by taking this courageous step they were rewarded.

The weight of this community support is undoubtedly invaluable.

If you too would like to strategize about your upcoming project and how to counter the negative minority voice, then contact Sam at PropertyESP – because as many in the property sector know – this is our forte!

Well true to its predictions, 2016 did show some green shoots in Perth’s property recovery.

I remember hosting the 2016 Property Council Outlook lunch in February, where experts such as Paige Walker and Lloyd Jenkins stated that they felt that we had hit the bottom of the market and we were in a period of stabilisation.

And since then we have had these claims reconfirmed by the likes of Warwick Hemsley and REIWA President Hayden Groves.

As Lloyd also predicted, education has come to the fore with Curtin University’s plans to house 20,000 students in its own dedicated city well under way.

And the hospitality and retail sectors are also now playing a more pronounced role in the state’s economy.

The construction of 5 star hotels such as the Ritz Carlton, the 50,000sqm expansion of Carousel Shopping Centre and the $250 million Kings Square redevelopment all spell positive outcomes for Perth.

Add to this the construction of Perth Stadium, the Swan River Pedestrian Bridge and the train line to Perth Airport and on to Forrestfield, and I am beginning to wonder what else we need to see to demonstrate that Perth is far from faltering.

We have several precincts also undergoing revitalisation including Scarborough, Canning Bridge, Murdoch and Canning City Centre which will densify the CBD ring and apartment living.

When you consider all these developments, it is quite evident that Perth is going through a period of disruption and, despite what some may protest, this is a good thing.

At PropertyESP, we have seen some areas such as Fremantle, Scarborough and The Springs hold their own and even grow in property value over the past five years. And where there are improvements to infrastructure, our research shows that there are positive flow on effects to property values.

And as we stare ahead to 2017 we can expect to see some interesting twists, with of course the State Election in March.  Any change in government will be followed by a period of adjustment, with major projects in the pipeline of works, the legacy of the Barnett Government will continue for several years yet regardless of the election outcome.

Despite what faction you may favour, it is clear that Perth needs this wave of investment to continue and the injection by the State Government to date of Elizabeth Quay, Northbridge Link and Perth Stadium has given the private sector the confidence to also invest and that has been a major sustaining factor to our ability to ride out the mining downturn with some robustness.

So as we say adieu to 2016 – we have to do so with some mixed feelings.  We have seen some green shoots but other sectors such as the office sector are certainly feeling the pinch.

And so maybe these tough times in the office sector will spur some other investment wave?

Regardless, I am looking forward to 2017 and the ongoing evolution of Perth!

To all our readers and their families – may you celebrate the conclusion of 2016 with great gusto! Regards the team at PropertyESP. 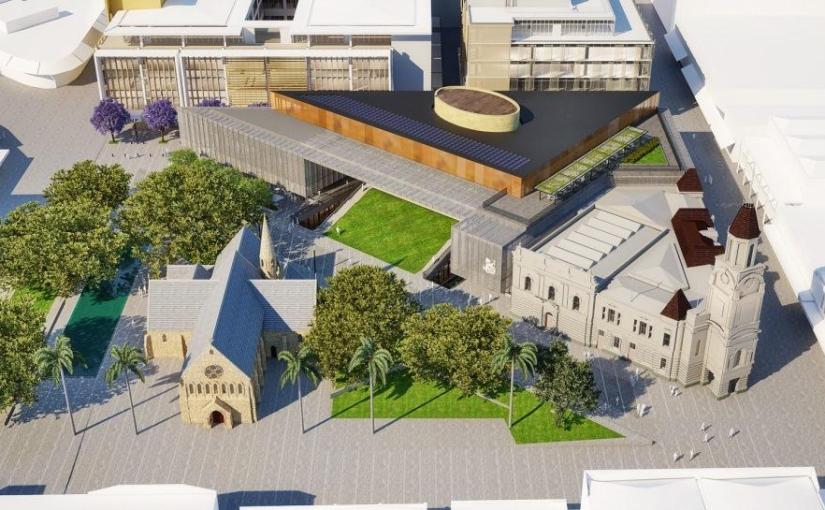 Fremantle has been in the news lately with the recent announcement of the $250 million Kings Square project now being a physical reality.

But after Samantha Reece attended the official launch of the “Oval to the Ocean” function, which was hosted by the City last night, we have come to the realisation that Fremantle is setting its sights even further afield.

But with the Ovation of the Seas docking yesterday for the first time in the Fremantle Harbour, the Council is now keen to refurbish the outdated passenger terminal and create an attractive entrance for visitors into the town centre.

Currently being used as a car park for imported vehicles, the City has recognised that they are wasting prime real estate within South Quay and have set 2029 as its date to celebrate not only the bicentenary of the establishment of the Swan Colony but also the launch of this new precinct.

Predicting private investment of $3.5 billion and 3700 new jobs, the City is both ambitious and proactive for South Quay and in this climate, that is the ideal mix.

In conjunction the City has prioritised the Fremantle Oval and Hospital precinct and a master plan is under way with the intent to host sporting and community events all year round, as well as establish a WAFL Centre for Excellence.

It appears that Mayor Brad Pettitt and his Council are seeking to restore Fremantle to its heyday of the Americas Cup and quite frankly, it is long overdue.

The City has been strategic with approving apartments to house another 4000 residents within its CBD and this will increase its discretionary spend from $11 million to $70 million and this will only bolster the local businesses as well as economic prosperity.

This City not only has a vision – but it is actually fulfilling it – and for that we wish to commend the staff and Councillors.  It takes guts and determination to move a community forward with such momentum and the City of Fremantle is demonstrating that in the right climate anything is possible.

If you are wanting more information than contact the City directly – they have made it quite clear that they are open for business and this proactive approach is very refreshing indeed!